In this paper, we compare the BEM method with the smoothness-constrained inversion algorithm CRTomo introduced by Kemna (2000) and used by Caterina (2013).

The fractured model (Fig. 1) aims to represent sharp lateral contrasts of electrical resistivity between different rock formations that are more or less fractured.

The first layer of the model is composed of a 10 m thick super­ficial conductive body (80 Ω.m) representing the overburden. The second layer indicates weathered rocks (200 Ω.m) more or less thick (from 5–15 m). Then, a conductive body (200 Ω.m) repre­senting a more fractured zone is inserted between two resistive bodies (1000 and 3000 Ω.m) which shows the host rocks. The width of this fractured zone is equal to 100 m. Finally, a square body (80 Ω.m) is inserted inside the fractured zones to illustrate a karstic conduit. It is assumed that the water table depth is 10 m so, the model is fully saturated underneath it.

Caterina (2013) used a finite element mesh composed of 5 x 5 m cells where 5 m is the unit electrode spacing used in the chosen con­figuration and a dipole-dipole array with 64 electrodes (a profile of 315 m long) and n ≤ 6 (typically used in field acquisi­tion) to calculate our data through forward modelling.

They used the smoothness-constrained inversion algorithm CRTomo to invert the data. The objective function is mini­mized through an iterative Gauss-Newton scheme where, at each iteration, the jacobian matrix is computed. The inversion starts with a homogeneous model whose value is determined from the mean apparent resistivity. The itera­tion process is stopped when the RMS (root-mean-square) value of the error-weighted data misfit reaches the value 1 for a maxi­mum possible value of the regularization parameter. The inversion result is shown in figure 2.

BEM technology is a unique and creative geophysical technique that investigates subsurface structures by analyzing the reaction of layers components to the electromagnetic waves in the frequency domain.

The transmitter can transfer several frequencies simultaneously. It is a point that makes it possible to analyze received data in several frequencies which belong to different depths and after that comparing results with each other can help researchers find a better vision of what’s going on, in different layers.

BEM transmitter is 14 kg and its 50*50cm receiver has 10 kg weight. The NS for the transmitter is 800 and the receiver is 1200. The receiver is high sensitive (-140db) which is able to work with a frequency range from 100 Hz to 40 kHz and separate subsurface layers based on resistivity. As well as being sensitive to the nonconductive layer, it is able to increase the power of intensity to investigate deeper sections.

We used the BEM method to create a synthetic dataset with an offset of 9 meters. The number of frequencies components in the electromagnetic signal is 15.

The inversion Result of the BEM Method is shown in figure 3. As it is observable in figure 3, BEM method has a better result in comparison to CRTomo and can distinguish between low and high conductive layers.

The thickness of the last layer in the inversion of the frequency domain data cannot be determined and has been remained unknown in BEM and CRTomo Method. But in separation of layers with different resistivity, BEM method has a better result. The sub-layer with low resistivity is determined in BEM result but in value of resistivity there are some errors while the following layer is not visible in CRTomo result. 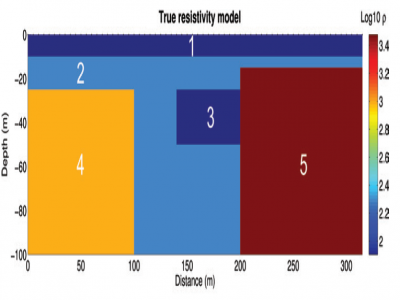 In this paper, we compare the BEM method with the smoothness-constrained inversion algorithm CRTomo introduced by Kemna (2000) and used by Caterina (2013).